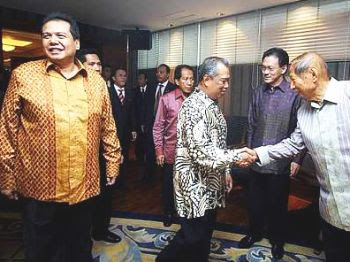 INDONESIAN billionaires are ready to make Malaysia their prime investment destination after being assured by the Government they will not face any obstacles.

The billionaires, led by the influential entrepreneur Chairul Tanjung, indicated they were ready to come to Malaysia as early as next year.

“Funds are not an issue to us. All we need are the opportunities and commitment from Malaysia which I am very happy to say we are seeing now,” he said in joint press conference with Deputy Prime Minister Tan Sri Muhyiddin Yassin here yesterday.

Muhyiddin had earlier met Chairul and a group of Indonesian billionaires at Chairul’s office at Bank Mega tower.

Among the billionaires who attended the meeting were Djarum president/director Robert Budi Hartono and Ciputra president Ir Ciputra.
Nice to meet you: Muhyiddin being greeted by a group of wellknown Indonesian businessmen before their meeting in Jakarta Friday. On the left is Para Group chairman Chairul Tanjung. – Bernama

Forbes magazine ranks Chairul as Indonesia’s seventh richest man with a net asset worth US$1bil, mainly through his Para Group.

Chairul said among the sectors they were keen to invest in were healthcare and infrastructure.

“We are looking at Kuala Lumpur and Johor to invest in,” he said.

Muhyiddin said the Government was ready to offer incentives to suit the Indonesian businessmen’s requirements.

“I told them that they could see me directly should they face any difficulty.“They also have my assurance that their applications would be approved in the shortest time possible,” he said.

Muhyiddin described the interest by the Indonesian tycoons as a new era in bilateral trade between both countries.

He said Indonesian investors had skipped Malaysia due to the perception that the country was off limits to them.

“I am happy to say that the perception has been corrected with this meeting,” he said.
Posted by helmiehassan at Friday, December 03, 2010